Last weekend, the fourth and last student swimming competition (NSZK) of this year was held in Delft, and what a day it was! Not only did we conquer the 5th place in Delft, 8 club records and a Stichting NSZK record were set as well.

In the first relay, fast Bram broke the record for the 50m butterfly (25.84). Also, after swimming the 50 breaststroke in 30.19, Bram finally has his record all to himself. As if this were not enough, his 200m breaststroke time (2:30.32) was not only a Ragnar, but also a Stichting NSZK record!
With a time of 2:53.91, Karlien managed to break the 200 breaststroke club record as well! Dian swam to Ragnar fame on the 50m backstroke (33.83). Lastly, all three relays set new records or improved existing ones! The 4×50 butterfly (Bram L, Veerle, Hondelmark and Dian) set a time of 1.58.70, and Karlien, Dian, Laura and Maxime set a new record on the 4×50 freestyle (2:05.33). Last but not least, our 4x100m medley men’s relay (Hondelmark, Ionut, Bram and Derrick) improved the 6-year old record by 12 seconds, setting a time of 4:27.57.
With these great performances, and those of the previous three NSZK’s, Ragnar claimed a SIXTH PLACE in this year’s final ranking! To celebrate this, our Vikings did what they do best: party until the early hours. We had a great weekend and would like to thank DSZ WAVE for organizing the event!

Would you like to join student swimming, and water polo competitions next year? Come say hi to Ragnar at the Eurekaweek! We will be there at the Sports and the Information market. 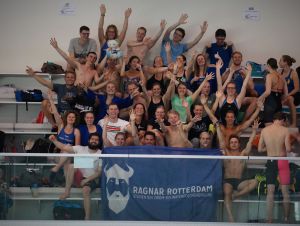 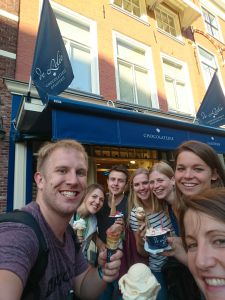 The water polo practices have ended already unfortunately, but we still have swimming practices three times a week until the 29th of […]

Besides playing water polo and swimming Vikings love to get together for a drink or to get food. This time we celebrated […]